In Uzbekistan there are about 30 thousand Bashkirs, whose ancestors had come here and stayed.
Bashkir public-cultural center named after Zaki Validi of Tashkent was established in June 1990 and having become the first public Association of the Bashkirs for the purpose of revival and improvement of the national language, customs, traditions, is working hard in this direction. 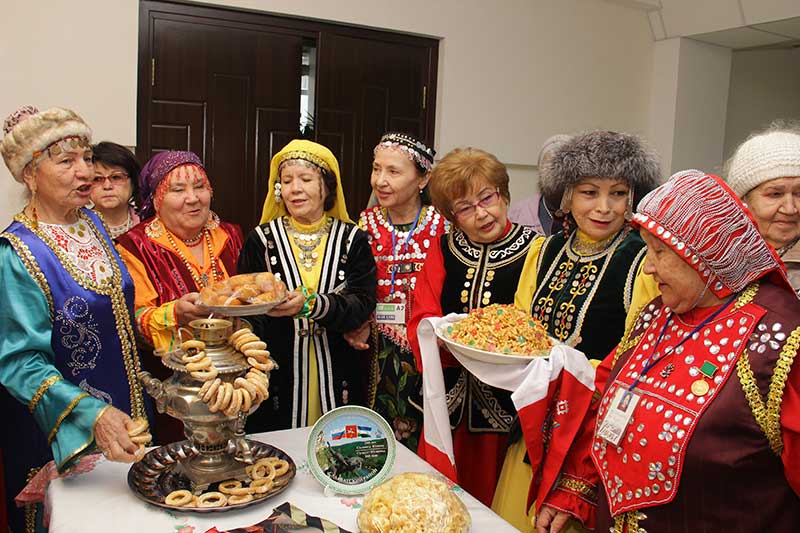 Special attention in the center is given to the study and promotion of the rich folk heritage of Bashkir people, the pearls of which are heroic poems “Ural-Batyr”, “Akbuzat”, “Alpamysh”, “Koziy-kurpyas and Mayanhylu” and “Zayatulyak and Hyuhylu”. Along with this the work of contemporary poets and writers of the Tatar-Bashkir origin is promoted. Among them there are Yavdat Ilyasov, the author of historical novels “Sogdiana”, “Black widow”, “Golden idol” the famous in the Republic and the Tashkent original poet Rim Yusupov.

Youth group “Legacy” collects historical information about famous Bashkirs of Uzbekistan, publishes of thematic booklets about them, and honors the figures of science and culture. And, of course, the events dedicated to the life and work of the eminent person of social, political and cultural life of Uzbekistan of the 20s of the last century, the outstanding scientist-orientalist, Akhmedzaki Validi, whose name the center is proudly named after, have become traditional.
The celebrations in honor of Independence Day of Uzbekistan and the Day of Bashkortostan, national holidays, similar to the Uzbek—Navruz, Ruza and Kurban Hayit, the Tatar-Bashkir holiday of plough Sabantuy, of harvest—Unysh Bayrami are conducted emotionally and colorfully. According to many years tradition the festival of Bashkir culture has become the annual; under it the art is demonstrated by the masters of arts of Uzbekistan and Bashkortostan, including Bashkir folklore ensemble “Agidel”, the winners of the republican festivals “Uzbekistan is our common home”—the Tatar-Bashkir creative union “Duslyk”, Tatar-Bashkir ensemble “Yashlek” with a lot of old songs and dances.

From 1995, the center participates in a World Quriltai of Bashkirs in Ufa by focusing its activity on meeting the spiritual needs of the Bashkir Diaspora, propaganda of achievements of Uzbekistan in Bashkortostan and Bashkortostan in Uzbekistan.
Currently, along with Bashkir cultural center named after Zaki Validi—in Bukhara, Kashkadarya and Samarkand regions the Tatar-Bashkir cultural centers operate, having became the symbols of friendship and unity of the fraternal peoples.