Turkmens in Uzbekistan inhabit from ancient times and preserving their centuries-old culture, traditions, seamlessly have blended into single multinational family of the peoples of Uzbekistan. The vicinity of language, common historical roots and destinies, as well as eposes, legends and tales make the Turkmens and the Uzbeks kin. Constitutional rights for the development of their national culture, language, traditions and customs are implemented by the Turkmens, the ethnic group of which is more than 189 thousand people, through the activities of the Republican Turkmen cultural center, established on May 7, 2001. Today it consists of Turkmen national cultural center of the Republic of Karakalpakstan, regional offices in Bukhara, Kashkadarya, Surkhandarya and Tashkent regions and Tashkent city. 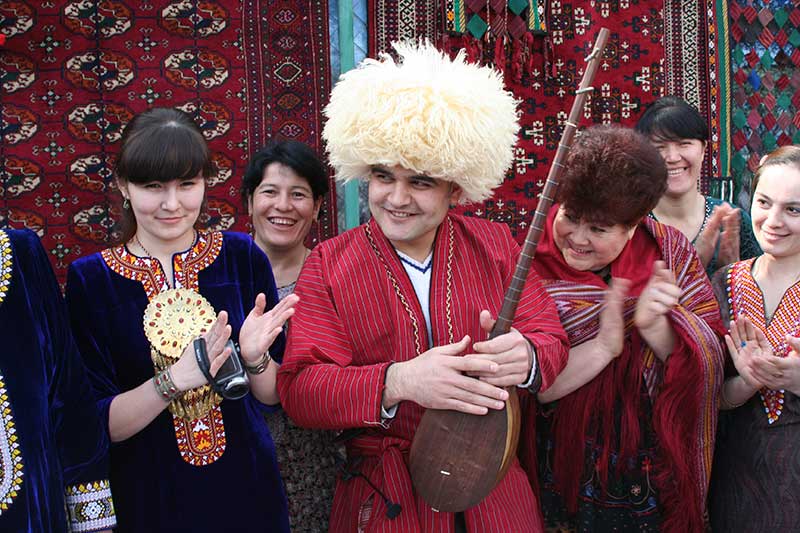 Within the work with youth the centers created amateur art collectives. The most famous of the is the folk ensemble “Orzu” from Turkmen center in Karakalpakstan. There also the monthly newspaper “Mekan” is published.
The center and its divisions are actively involved in national holidays of Uzbekistan—Navruz, Independence Day, Constitution Day and others. Traditionally—with the participation and support of other public and state organizations of the republic—the anniversaries and the jubilee dates are celebrated for the founder of Turkmen literary language, the poet, the thinker of the eighteenth century Mahtumkuli Fragi, the classic of Turkmen literature Kadyrberdy ogly Mollanepes, the presentations of collections of their works, translated into the Uzbek language, the exhibitions of Turkmen art and folk art are held.

Contributing to the development of Uzbek-Turkmen relations on the principles of mutual respect, trust and mutually beneficial cooperation, the community of centers celebrates the Day of neutrality of Turkmenistan, organizes the evenings of the Uzbek-Turkmen friendship.
Every year the Turkmen cultural center of Uzbekistan participates in conferences of the Humanitarian Asso­cia­tion of Turkmens of the world, the World Asso­cia­tion of connoisseurs of Turkmen hand carpet-making, International festival of national customs and traditions and other international events.