On May 19, President of the Republic of Uzbekistan Shavkat Mirziyoyev chaired a video conference to discuss additional measures to support entrepreneurship.

Once more, while starting the meeting, the head of state expounded on ongoing work to counter the pandemic.

Of the 2,880 people diagnosed with coronavirus, 2,314 or 82 percent have recovered completely. More than 78 billion soums were paid as bonus to 23 thousand medical workers who show genuine courage on this front.

“Along with combating the disease, we also are taking care of our citizens abroad. To date, we have brought 39 thousand compatriots. Measures are being taken to provide the necessary assistance and the return of another 12 thousand who found themselves in a difficult situation abroad,” Shavkat Mirziyoyev informed.

Activity is restored in various sectors of the economy. For example, over the past week, electricity consumption by business entities increased by 13 percent. Over the last two weeks, cement sales on the commodity exchange has grown by 104 thousand tons, fuel – by 74 thousand tons, industrial glass – by 60 thousand square meters compared to the same period last month.

Dividing the regions into “green”, “yellow” and “red” zones based on the epidemiological situation, about 110 thousand business entities have been allowed to resume activities, and more than 600 thousand people returned to their jobs.

In general, over the past two months, 12 decrees and resolutions have been adopted by the President to mitigate the impact of the pandemic on the living standards of the population and the economy. As a result, more than 500 thousand entrepreneurship units and over 8 million citizens received benefits and preferences in the amount of nearly 30 trillion soums.

On May 18, the President signed another decree on subsequent measures to support the population and entrepreneurships during the coronavirus pandemic. In accordance with the document, more than 500 thousand enterprises and about 100 thousand people will receive additional assistance worth 1.7 trillion soums.

“No matter how difficult it may be, we have done everything necessary to create the conditions. Now the leaders of economic and investment complexes and sectors must ensure that every entrepreneur and citizen are making use of these benefits,” the President stressed.

The Republican Commission was instructed to gradually allow the activities of more than 40 thousand business entities with an eye to the epidemiological situation in industries and regions. At the same time, it is necessary to strictly observe the rules of quarantine, since 38 regions of the country today remain in the “red” zone.

The pandemic is expected to lead to the growing number of poor and unemployed, and reducing family incomes. Therefore, it is necessary to actively support small business and family entrepreneurship in order to create new jobs within a short time.

The meeting participants discussed additional measures and priorities in this direction.

First of all, serious attention is paid to securing the rights of entrepreneurs and the inviolability of their property.

“I warn all hokims. If the property of at least one entrepreneur is seized illegally, the hokim will not get off with a single resignation, but will stand liable before the law,” Shavkat Mirziyoyev said.

Relevant authorities have been instructed to strengthen responsibility for infringing on the inviolability of property, to ensure the full implementation of judicial decisions on compensation for property of entrepreneurs.

In accordance with the President’s instructions, business activity in each district and city will be analyzed on a monthly basis. The Business Ombudsman will provide the government with information on hokims of districts and towns that allow for encroachment of the rights of entrepreneurs and inviolability of their property.

The Cabinet of Ministers will consider the issue of competence of town and district hokims who fail to address the problems of entrepreneurs and to work with them sufficiently.

A new system will be introduced to create decent conditions for self-employed citizens. Thus, hairdressers, shoemakers, bakers, blacksmiths, carpenters, tailors, taxi drivers, photographers, translators, designers, programmers – the self-employed representatives of more than 60 professions will be exempt from income tax. To take advantage of this benefit, it will be enough to notify the tax authorities by phone. Based on international best practices, a mobile application will be developed for registration and accounting of self-employed citizens.

As a result of the permission for private notaries, 617 state notaries offices became private, which allowed for saving budget funds in the amount of 200 billion soums.

If you transfer to the private sector the services currently provided by state bodies, such as the preparation of cadastral documents and topographic surveys, this will create thousands of new jobs, it was indicated at the meeting.

The Ministry for Economic Development and Poverty Reduction and the Ministry of Justice were instructed to draw up, on the basis of accurate calculations, a list of public services that could be transferred to the private sector.

During the lockdown period, many organizations may lose solvency and be on the verge of bankruptcy. In this regard, a procedure is being introduced according to which, in case of reorganization of an enterprise, its tax and other debt arrears can be repaid after quarantine has ended.

The head of our state criticized the procedure for selling state assets to entrepreneurs, and noted its high bureaucratization. In particular, 53 percent of the land and real estate facilities put for auction remain unsold for a long time due to burdensome investment obligations and the lack of developed infrastructure. In addition, over the past four months in 57 districts and towns, not a single land plot was offered for auction for business purposes. 552 objects of state property are void.

The President urged to locate production facilities in these facilities, and set up small industrial zones on the basis of some.

From now on, small industrial zones will be organized on the principle of ownership, and the private sector will actively participate in management. The Agency for the Development of Small Business and Entrepreneurship together with local hokimiyats will be engaged in the placement of such zones, the allocation of funds for infrastructure and the involvement of the private sector in management. This year, 200 billion soums will be allocated from the Anti-Crisis Fund to connect these industrial zones to the infrastructure.

As part of mitigating the effects of the pandemic, the repayment term of 1 trillion soums of loans allocated to the program “Every Family Entrepreneur” was extended. Therefore, for the full implementation of the program, $ 100 million was assigned from the Fund for Reconstruction and Development.

Shavkat Mirziyoyev emphasized that all restrictions established for entrepreneurs in obtaining loans for products, equipment, raw materials and working capital should be removed. The Central Bank has been instructed to simplify lending conditions for small businesses and family entrepreneurship.

It was noted that in order to create demand for goods it is necessary to stimulate trade and expand consumer lending in order to increase the purchasing power of the population. 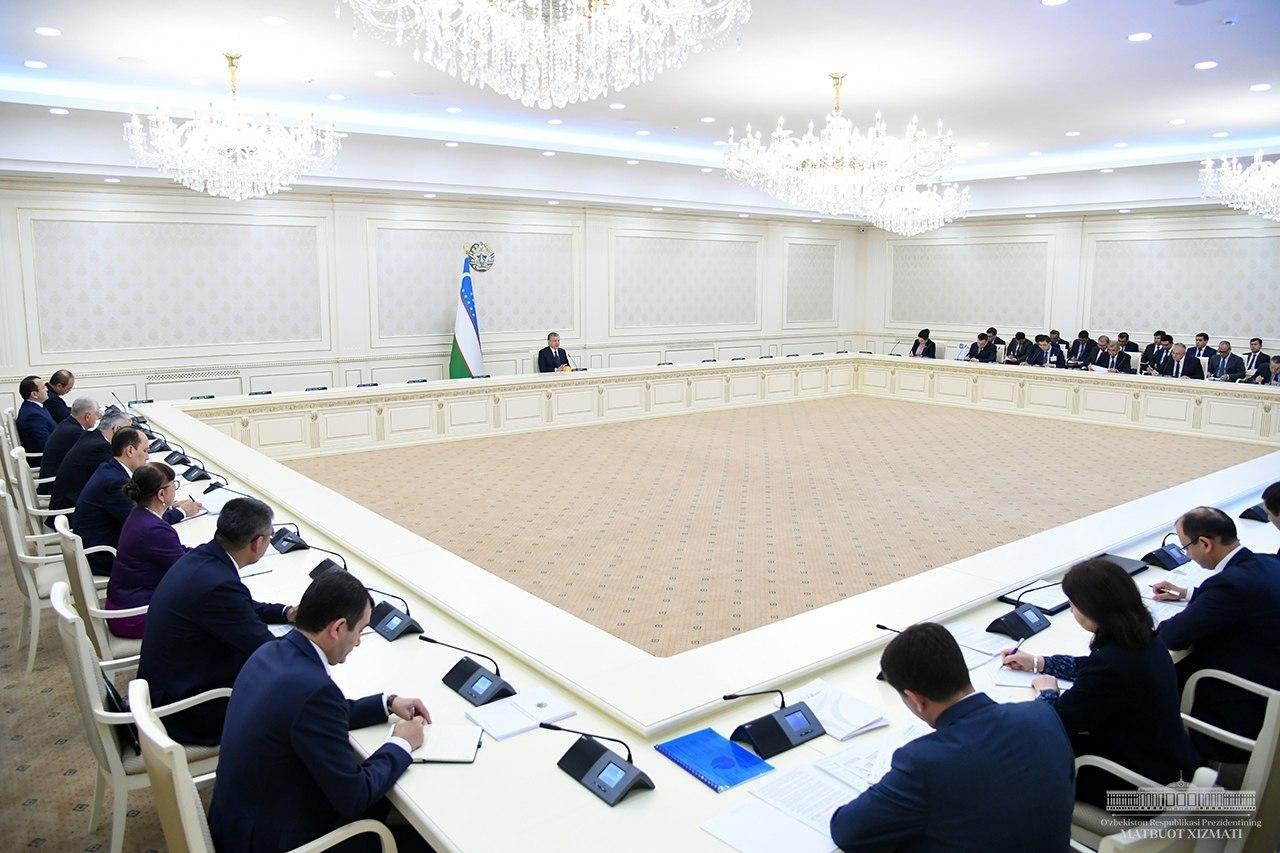 The problems in this area are provided by the fact that 55 percent of appeals received by the People’s Receptions and Receptions of the Prime Minister are related to bank loans. In addition, entrepreneurs’ appeals regarding banking services were positively resolved in 10 percent of cases at the National Bank, in 11 percent – at the Microcredit Bank and in 13 percent – at the Agrobank.

The head of state underscored that the activities of banks should be judged by the quality of customer services.

Commercial banks are an important link in the development of small businesses; they should, it was stressed, expand the scope of support for entrepreneurs and citizens by investing in “growth points” in each district.

The President ordered to dismiss hokims of certain districts and towns for their shortcomings in working with entrepreneurs.

Responsible officials provided information on how the work is to be arranged in fulfillment of the tasks set at the meeting.