In Uzbek families, as in many countries, women are engaged in cooking, but it is believed that the art of cooking this holiday pilaf belongs only to men. Quite often in the chaykhanakh among frequenters pilaf cooking competitions are held.

According to folk tradition even in the  name of pilaf – “Osh pilaf”  initial letters of names of the main components of this dish – onions, carrots, meat, oil, salt, water and rice lurk.

The recipe of preparation of the well-known Uzbek pilaf for centuries passed not only from generation to generation, from father to son, but also by word of mouth, from hand to hand through merchants and travelers along the Great Silk Road. Taking into account the local tastes and available ingredients it changed this or that way becoming a popular meal at all east people from Xinjiang to Azerbaijan.

In the Uzbek cookery more than fifty kinds of this dish are known: with meat and chicken, with peas and potatoes, steamed and fried on mutton tailed fat,  a in Khorezm way and a in Samarkand way, with a quince and with garlic … 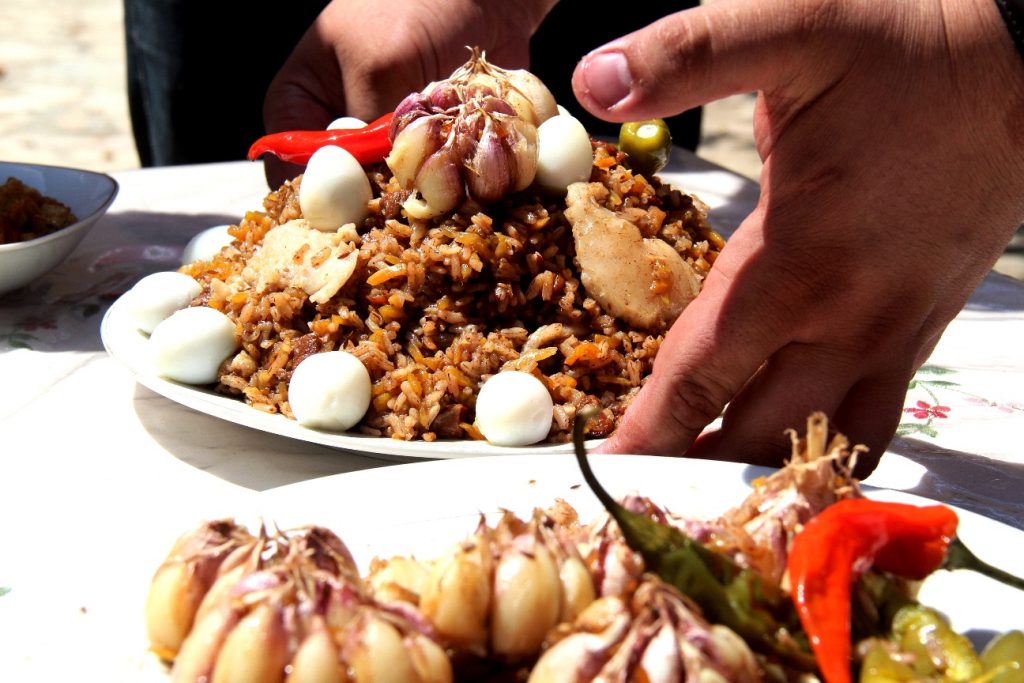 Ancient recipes of pilaf with partridges, pilaf with raisin or pilaf from rice of wax ripeness remained in an invariance since the X-XII centuries, and some ways of preparation of “classical” pilaf total thousands years.

The process of cooking festive pilaf looks like a religious rite. For good pilaf coking first of all ф cast iron pot with a round bottom and the whole set of sharp steak knives for cleaning,  choping and cutting meat, onion, carrots and special metal skimmer (slotted spoon) are needed. The whole team of assistants cook clean and cut onion, carrot like straw, whereas the best variety of pilaf carrot is not orange-red but special light yellow one.

Rice is carefully washed out and sometimes even presoaked in water. In the heated pot mutton fat or vegetable oil is heated before a light white smoke arises and then cooking the gravy of pilaf begins. First onion is fried in boiling fat or oil then the pieces of meat must be put. For pilaf, depending on options of the recipe both mutton, and a goat’s meat is good, also beef and even a horse-flesh – of which a special sausage-kazy is made and added in some types of pilaf. Meat is fried stirring with a slotted spoon until formation of a ruddy crust then carrot is put and slightly fried, afterwards some water should be poured in pot and simmered stew. Ready gravy seasoned with salt, red chilly pepper or paprika, cumin seeds and dried berries of barberry, has to be transparent and clearly give feeling of all flavoring scale of the fried mix of onion, meat and carrot. 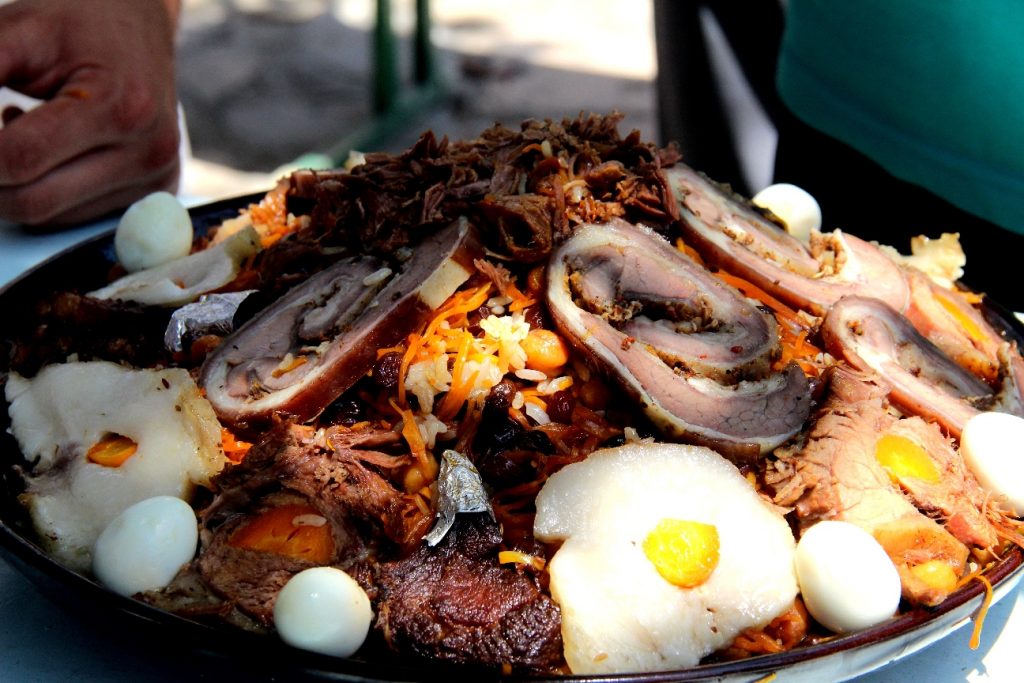 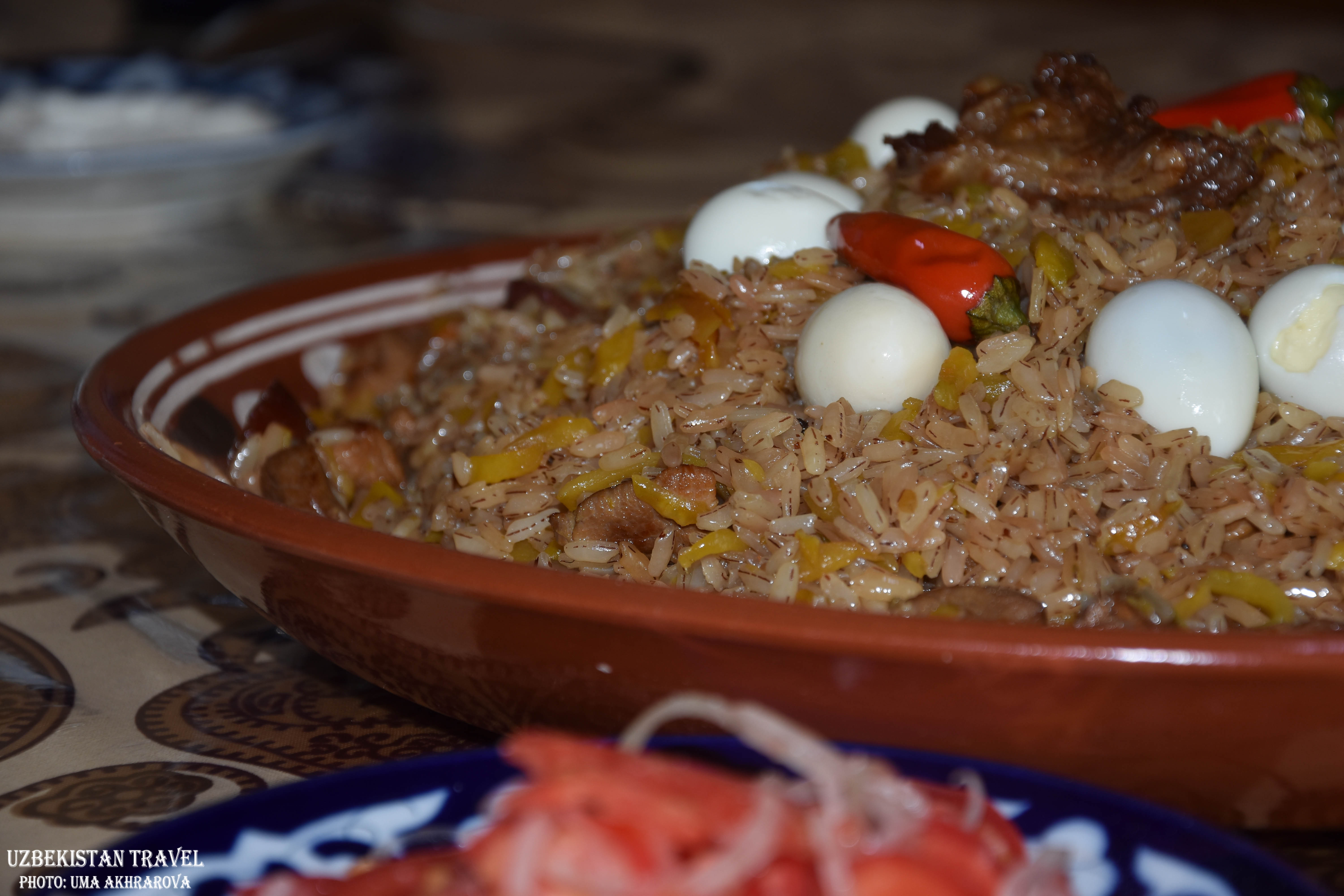 The best brand of rice for pilaf is “devzira” – the local ancient grade created by centuries-old national selection. It is known from historical chronicles that in the X-XI centuries during an era of the Samanids pilaf from devzira rice served on court feasts. This grade is cultivated in Fergana Valley mainly on personal plots of peasants as it is considered low-yield crop and not suitable for cultivation on big plantations. However low productivity of devzira is compensated by excellent quality of pilaf. Its oblong ribbed grain pink hue , tumbled in a water mill have a high water absorption properties and contain less starch , but superior to other varieties in the amount of vitamin B2 and choline. Dry rice crackles in a handful, powdering palms with gentle pinkish pollen.

Other local rice variety – bugdaygurunch (grain rice) is also good for pilaf. Its large white grains with a nacreous shade need to be presoaked  before putting in pilaf from one to two hours in warm salted water.

Rice should be laid over meat and carrot  evenly and filled in with water so that its level over rice was at the level of “the first joint of a forefinger” of a cook. When water evaporates from the pot some holes are made  in rice with a special  wooden stick where a little more water is added.

In the real pilaf rice has to be crumbly, its grains have to be soft and not stick to each other. To bring pilaf to readiness, rice is collected to the middle ahill and a pot is  tightly covered with  a special ceramic lid – “damtavok” or  a big soup plate and the fire reduced to minimum. The skilled cook defines readiness of pilaf, banging with a skimmer  on the rise hill. If water from rice has not completely evaporated – hissing and if the dish is ready is heard – the  clunk is produced. Pilaf is served on a table in the big ceramic or faience plates-lyagans. Rice`s laid beautifully like a hill, on a top  pieces of meat put and all this strew with fresh chopped greens. In the ancient times at weddings pilaf used to be served to each guest separately on flat cakes. 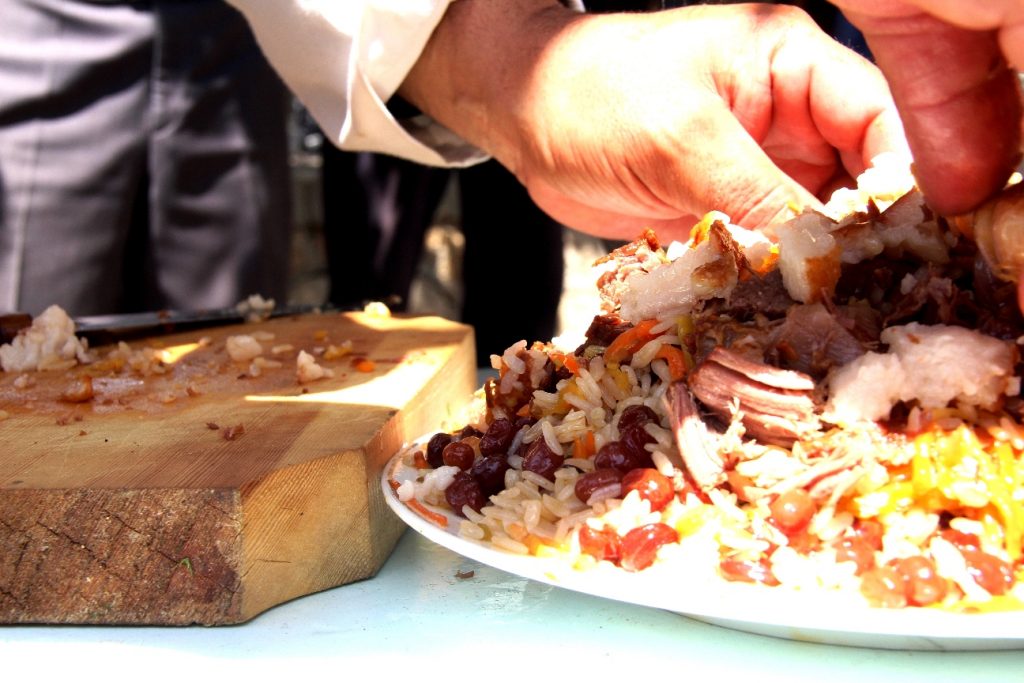 In olden times pilaf was considered as curative foods. Indeed pilaf is high-calorific, easily digestible food, with the balanced ratio of carbohydrates, fats and protein can successfully be applied at an anemia, tuberculosis and the general exhaustion.

According to a centuries-old national tradition in Uzbekistan pilaf served mainly in the evening for dinner. Obligatory addition to pilaf are salads from fresh or marinated vegetables, fruit and berries – tomatoes, cucumbers, a radish and a red radish, green onion, grains of pomegranate, sour grapes, cherry, strawberry with addition of greens of cilantro, fennel, parsley, garlic and basil leaves. Salads not only enrich pilaf with vitamins, but also promote the best assimilation of this quite fat meal. And certainly, on a table there has to be tea. In Tashkent people prefer black tea and in other regions of Uzbekistan green tea – “kook choi” is preferred. A peculiar ritual of preparation of tea is strictly observed in each family. The hostess rinses a porcelain teapot with boiled water, puts tea in it with a special tea spoon  and having made douses  over the  teapot with boiling water. A few minutes later a kettle and bowls – small porcelain bowls are served on the table. It is necessary to pour in a drinking bowl some freshly brewed  tea and to pour it back in a teapot three times, so taste and aroma of drink comes to light better. Respected guest usually served some tea in a drinking bowl approximately in a third of its volume, only a few sips. he hostess offers crystal sugar-navat, honey or sweets to tea. Hostess offers crystal sugar-navat, honey or sweets to tea.

EUROPEAN EXPERTS: THE ISLAMIC HERITAGE OF UZBEKISTAN IS DECENTALLY PRIDE

The other day at the European Islamic University of Applied Sciences (Rotterdam, The Netherlands), a […]

Ecobazaar in Tashkent hosts a Honey Fair. Beekeepers from all over Uzbekistan brought here a […]

Japan and Uzbekistan: through the eyes of children

N.B.U. Studio at the Art Gallery of Uzbekistan, the NBU FEA together with Uzbekistan – […]